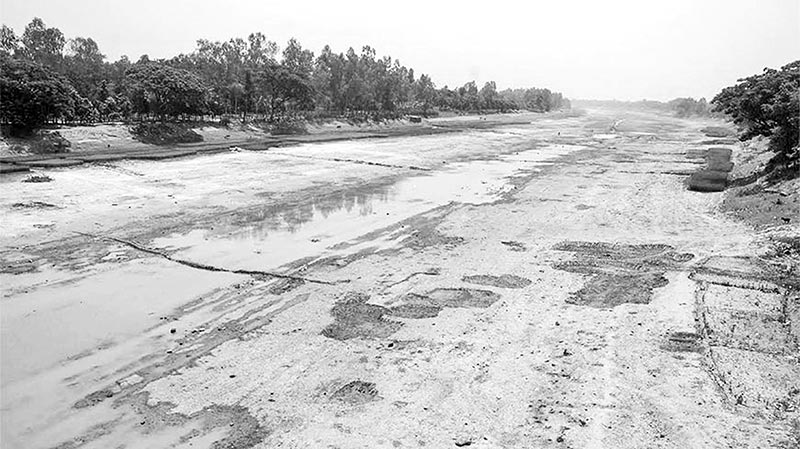 Once four thousand rivers flowed in Bangladesh. But at present, these rivers are about to extinct. Bangladesh is a riverine country. This distinctive feature is getting lost for the illegal grabbing of rivers. There are two types of river grabbing such as grabbing rivers by the land robbers who are making structures in the river and the other is throwing industrial wastes and related other wastes into rivers. For these reasons, our rivers are losing their navigability day by day. Moreover, our urban drainage system also does not work properly.Due to heavy rain or even the normal rain, the roads and localities are flooded heavily which results water logging for a period which is a threat for our daily life and living and for our environment too. The negative impact of river grabbing has greatly been affecting the country’s agriculture. As a result, the status of natural beauties “Sujola SufolaShasha Shamola” of our country has also been losing gradually.

As a consequence of river grabbing, the capital city Dhaka has been considered as the most affected area. The most threatening fact is that the Buriganga, the Turag and other rivers are losing their navigability and becoming narrow day-by-day. On the other hand, water is polluted by the industrial waste which is also affecting our environment. As a result of water pollution and river grabbing, the rivers areas if crying which makes our minds sad. Even then we are still remaining unmindful regarding their protection or prevention.

People in different ways are grabbing rivers. Some are showing political power; some are getting support from administration and some people show their financial and muscle power to grab these rivers and build commercial buildings. As a result, our country loses its beautiful and resourceful rivers and canals and the river grabbers become rich. Due to the lack of close monitoring of Government, wrong control of rivers, withdrawal of water by India in the upstream water pollution and river grabbing, most of the rivers are about to extinct.
It is also alarming that not only rivers but also canals arebeing grabbed by the grabbers which will turn our country into a desert. River grabbing, river pollution and the other related matters help increase temperature in the atmosphere and cause a huge damage to our environment. The glorious characteristics of the six seasons of Bangladesh are losing its variations.

According to statistics of “Save the River Movement”, almost 50 per cent rivers have dried up during the last 47 years. As of a government census, we had 800 rivers all over the country. At present, this number stands at only 405, but according to private census, there are only 230 rivers in Bangladesh. A study conducted by different researchers indicates that every year, Bangladesh is losing 10 rivers which is also dangerous for our country. Already 25 rivers have disappeared due to river grabbing and pollution. At present, 174 rivers are in the process of extinction. If this situation or process continues, Bangladesh will be a desert within a very short time.

Courts have given directives again and again to the authority to take control of these rivers from the river grabbers and make these rivers free from pollution. The government also runs eviction campaign frequently against these illegal structures built by the grabbers on and around the rivers. And again, after a few days, these rivers are re-grabbed. It is a matter of hope that government at last takes these problems into consideration and takes necessary actions to implement the process of eviction of these rivers and canals.

The steps taken by the government makes people hopeful though people do not know exactly when and how these actions are to be executed. In this regard, Sheikh Hasina, the Honourable Prime Minister, Government of the People’s Republic of Bangladesh, always plays a pioneering role in executing such activities. When Prime Minister Sheikh Hasina gives instruction to the authority relevant to execute the process of eviction, people become enthusiastic and hopeful.
People of our country always become worried about the future of the rivers and its negative effect on them. Though some environmentalists and other related organizations have been working to save the rivers and canals, the river grabbers are still on their same position. As the Prime Minister herself takes matter into consideration and for her strict position against the grabbers, the relevant authority becomes very busy to implement it in reality. As a result, some parts of the Buriganga River have been freed from the grabbers. Different plans have been taken to prevent pollution. These plans and steps may be helpful to get back life to these almost dried up rivers. And these steps will create a positive impression among the people which will also spread in the society.

We want to see this beloved Bangladesh with its aesthetic natural beauties. We want to see variations of sweet six seasons in our country. It is our dream to see the capital city of Dhaka and the other cities as a role model in their respective fields. Though it should be a great challenge for us as well as for our government to protect this burning problem, it will not be impossible. This problem is not only for us, it becomes an international issue.
In this respect, to face these challenges or to cope up with these problems, Sheikh Hasina brings out some policies to the national and international levels which will motivate the people of all over the world to know about the negative impact of climate change as a result of water pollution, rivers and canals grabbing. We wish to see our Prime Minister’s plans to be implemented in reality for recovering the rivers from the grabbers and pollution.